WHAT IT MEANS TO BE CARBON NEUTRAL

What does it mean to be carbon neutral? We explain how we became the first carbon neutral packaging company in Australia, and why it’s so important to fight the climate crisis.

LIKE THIS ARTICLE? SHARE IT.
Tweet
We explain how we became the first carbon-neutral packaging company in Australia, and why it’s so important to fight the climate crisis.
You might have heard the term ‘carbon neutral’ or ‘carbon zero’ in reference to businesses or products. And while it certainly sounds good, it’s not always entirely clear what it actually means.

What does carbon neutrality mean?

BioPak is a carbon neutral business, which means that any carbon dioxide (CO2) released into the atmosphere from our business activities is balanced by an equivalent amount being removed/offset, achieving a net-zero carbon emissions effect.
To become carbon neutral, businesses and organisations calculate the greenhouse gas emissions generated by their activity, such as fuel or electricity use and travel. They reduce these emissions as much as possible by investing in new technology or changing the way they operate. Any remaining emissions can be 'cancelled out' by purchasing carbon offsets. Carbon offset units are generated from activities that prevent, reduce or remove greenhouse gas emissions from being released into the atmosphere. When the offsets purchased by an organisation equal the emissions produced they are carbon neutral.
So why did we choose to become carbon neutral?

BioPak is a responsible company, and we strive to reduce our impact on the environment as much as possible. While we have taken some steps to reduce our carbon emissions, at this stage some emissions are unavoidable, and buying carbon offsets is one of the ways we can reduce our impact, as we’re proactively investigating other initiatives to further reduce any negative consequences associated with the production, distribution and disposal of our products.

How did BioPak become carbon neutral?

BioPak has been carbon neutral since 2010, however, in 2019, we have made the decision to become certified to Australian Government backed standard, Climate Active (formerly NCOS). The program has strict requirements and it guarantees that certification is awarded to businesses and organisations that have credibly reached a state of achieving net zero emissions. Climate Active’s aim is to become the ‘Heart Tick Foundation’ of climate action.
We offset all emissions associated with our business and products, from raw material, manufacturing, transportation right through to disposal. While many of our products are composted, it is hard to track so we choose to calculate and cover the emissions that would be released in a scenario where our products end up in landfill.
Disposal equates to 66% of our carbon footprint, our goal is to halve this over the next 5 years by supporting our customers and local councils to increase composting rates.
Interesting fact: our wooden cutlery releases no carbon for us to offset – they produce zero carbon emissions! This is because the trees used to make our cutlery store carbon while they grow and the majority of this remains in the product even after you've finished using it – enough to offset all the emissions released from manufacturing, transportation and disposal in landfill.
The good news for customers who compost our wooden cutlery, or any of our products, is that the emissions created from composting are considered biogenic, part of the natural carbon cycle, and not counted towards our total emissions that need offsetting. The key assumption is that not all of this carbon decomposes, resulting in the storage of carbon in compost or soil, which will result in a carbon-negative effect, also known as climate positive. This means our carbon footprint is less than neutral/zero, as we have removed carbon dioxide from the atmosphere rather than adding it.
So the more products we can collectively compost, the better the environmental outcome as more carbon will be stored in compost and soil. 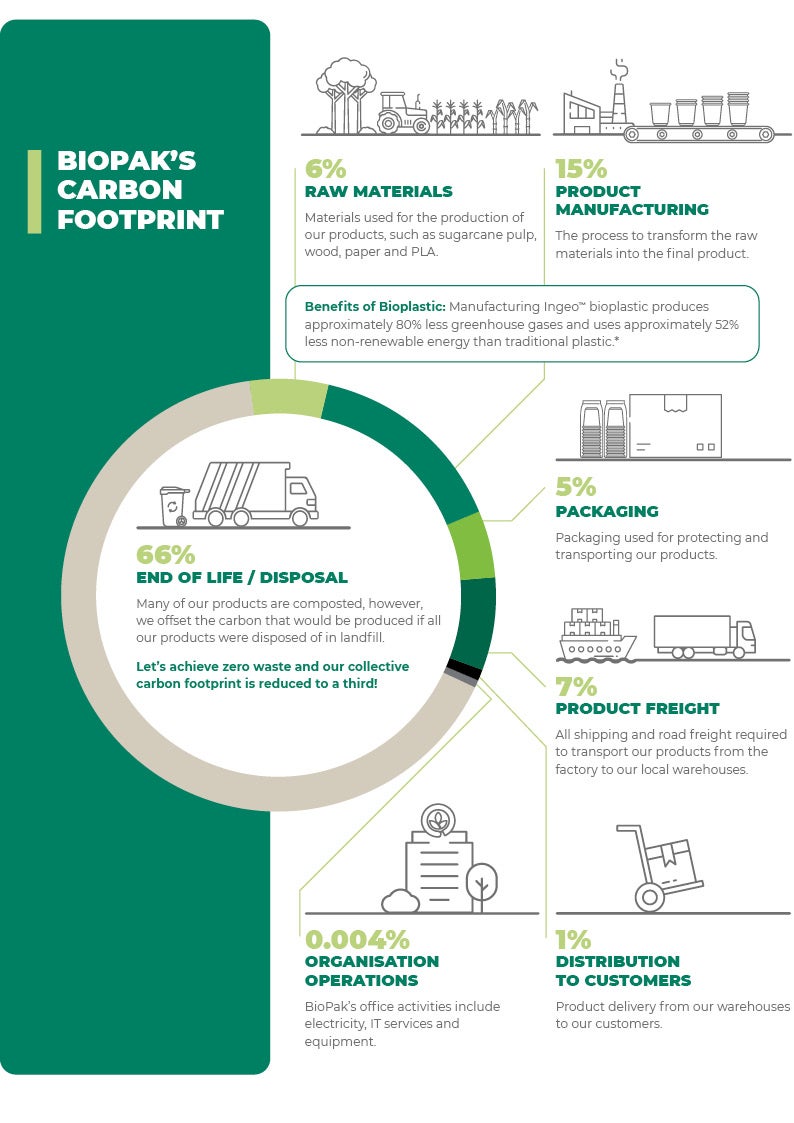